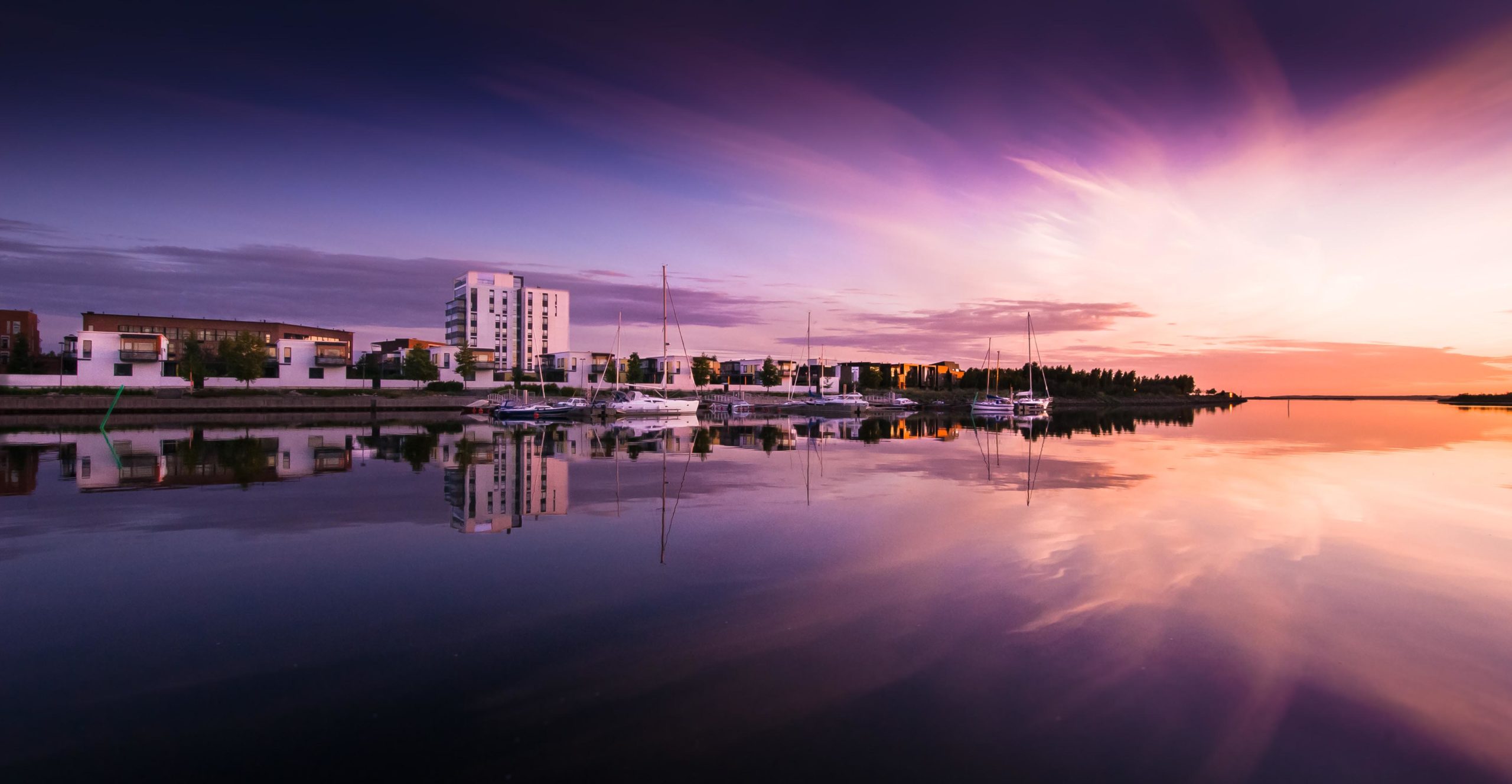 The variety of areas and nature in Oulu is charming, and you will never get bored exploring the city. The municipalities of Haukipudas, Kiiminki, Oulunsalo, and Yli-Ii merged into the City of Oulu in 2013, making the city even more exciting than before. The variety of neighbourhoods is almost endless, catering for many tastes.

There is also a wonderful variety of place names in Oulu, most of which have to do with the history or nature of the respective district. They all share their part of the story of Oulu with a higher grade of appeal.

Neighbourhoods in the beat of the city centre

Enjoy the beat of the city or a laid-back seaside atmosphere near you – discover them in Oulu city centre and the population centres right around it. Vaara and Pokkinen inside the city centre grid plan hold the best of services and architecture from art nouveau to 2020s engineering. The idyllic and beautiful Hollihaka and Leveri offer wonderful views and maritime ambience. Not far from the centre, you will also find Myllytulli in an old industrial neighbourhood, Intiö with its old wooden military barracks, and Vanhatulli, which is a combination of the old and the new.

Just a stone’s throw away is Raksila with its enchanting wooden district and a centre for many sports and fitness activities. Surrounded by services is also Limingantulli with plenty of new apartments. The Limingantulli district used to house a customs office where goods from the countryside were inspected before being allowed in the town for trading. Hence the name – Limingantulli means ”Liminka Customs” in English!

Just one kilometre from the city centre you will enter a whole new world if you set your course for the small house neighbourhood of Karjasilta, for example. Once selected as the best residential district in Finland, Karjasilta is not only dotted with lovely, colourful wooden houses but also old apartment buildings – all equally charming! You will see and feel the closeness of nature also in Höyhtyä, Nokela, Lintula, and Mäntylä. The Selvaag houses in Höyhtyä, the woods and ponds in Lintula, and the peaceful streets and parks in Nokela and Mäntyla all exude the unique Oulu housing culture.

While the previous areas represent the southern side of Oulu, in the north you will encounter the enchanting districts of Välivainio, Isko, and Pyykösjärvi. All three have plenty of detached housing, and Välivainio will become part of the inner city over the natural course of future city development.

The banks of Oulu River will lead you to the atmospheric and vibrant neighbourhoods of Hintta, Myllyoja, Haapalehto, Kirkkokangas, and Kynsilehto. Mainly consisting of detached and row housing, these are excellent areas for sports and other activities from jogging trails to skate parks.

Urban housing to suit many tastes

Are you looking for an edgy, urban lifestyle? Look no further! Selected as the neighbourhood of the year, Tuira is the epitome of versatility and multiplicity, for example when it comes to culture and events. The riverside part of Tuira is one of the most beautiful areas in Oulu, with the beach and the trails along the river catering for active yet relaxing moments.

Right next door to Tuira is Koskikeskus with a general plan designed by Alvar Aalto, the most famous Finnish architect by international standards. The atmosphere between the 1950s apartment buildings is insuperable! The Oulu River estuary is packed with small islands. Closest to the city centre is Pikisaari Island, a picturesque neighbourhood known particularly as the home of artists and artisans.

Sense the sea near home

The sea wind blows in Oulu, and there are several seaside residential locations to choose from, too. On the shores of Hietasaari Island, you can find Nallikari Beach, also known as the Riviera of the North, along with several harbours and other places for activities such as hobbies and recreation. Hietasaari is easily accessible from Toppilansaari and Toppilansalmi next to it – both of which also offer some of the most wonderful waterside scenery in Oulu. The stately and historic harbour storehouses nowadays offer unique housing alternatives. What is more, this is close to the district of Oulu Housing Fair, which is under construction to happen in 2025.

Follow the shoreline south or north to find fresh and cosy areas one after the other. In the north, you will come across Kello and Martinniemi for charming homesteads, while in the south you can discover the various lovely neighbourhoods of Oulunsalo.

Also situated by the sea is Äimärautio, a unique district in Oulu because it has no permanent residents at all. Instead, it houses the adorable Äimärautio community garden with allotments and huts that are sought-after spots for spending the summer in Oulu.

Oulu has plenty of peaceful areas where families and single people live in happy harmony. North of the city centre are the neighbourhoods of Koskela and Taskila, where the atmosphere is tranquil and most of the building stock consists of row houses or detached housing. Verdancy and small houses can also be found in Kuivasjärvi, Rajakylä, Pateniemi, and Herukka, for example.

Moving north, there are also the neighbourhoods of Jääli which are popular for families and contain detached houses and row houses from several periods. More recently built neighbourhoods include Saarela and Talvikangas, both of which are very accessible concerning children’s day care and schools.

Perfect for an active life

Are you a student or lead an active life otherwise? There is a pad in Oulu for you, too! The most ideal areas for students are the Kaijonharju and Linnanmaa neighbourhoods near the Linnanmaa campus. These are also clever choices for people working in the Linnanmaa technology village. Getting around is easy also from homes near the Kontinkangas campus and Oulu University Hospital, in Peltola, for example.

Located next to good public transport route and the accessible, excellent Oulu cycling network are the neighbourhoods of Alppila, Toppila, Kaukovainio, and Puolivälinkangas. The building stock in these areas consists mainly of apartment buildings – some charmingly older, renovated ones, and others more recently built. Along the Oulu River there is the district of Laanila from where the city centre, Linnanmaa, and Kontinkangas are easily and quickly reachable.

Picturesque neighbourhoods along the river

One of the most well-known landmarks in the scenery of Oulu is the Oulu River, with postcard-like residential districts built on both sides along it. Closest to the city centre is Värttö, with lovely scenery, beautiful parks, and a beach with a marina bringing life to the neighbourhood. Near the concentration of workplaces and schools in Kontinkangas and the services in Raksila is the Oulunsuu district with a versatile selection of old and new housing available.

The Maikkula and Knuutila districts have a lot of detached and row housing along with adorable small apartment buildings here and there. The nature is tangible in the neighbourhoods on a pine wood ridge along the river. Slightly further on is Madekoski with a village-type atmosphere right next door to Turkansaari Open-Air Museum. On the other side of the river is Sanginsuu, located where Oulu River and its tributary Sanginjoki meet.

Plenty of services around

Welcome to an abundance of services! It is not always in your interests to shop or sun errands in the city centre, in which case good services near your place of residence are golden. For example, the new district of Ritaharju is right next to the Ideapark shopping centre. All the other services in the area are unbeatable, too. On the other side of town, the Kaakkuri centre has a concentration of grocery stores and more specialised shops. The hypermarket of Rusko and other services near it are wonderfully reachable for the residents of Rusko, Heikinharju, and Korvensuora neighbourhoods.

Close to the nature

If you are not into urban life in the concrete jungle but are more of a nature person, check out this section. Even though Oulu is famous for its nature that will follow you right into the city centre, the neighbourhoods set within nature itself have a whole different atmosphere. Head out to Iinatti, for example: this easily reachable district has a network of running trails and a fitness track where you can enjoy the lush green nature around you while exercising. The Hiukkavaara neighbourhood built around the old army barracks of Oulu offers idyllic surroundings combined with modern housing and services.

The biggest main district in Oulu (and the whole of Finland) is Ylikiiminki. This area is paricularly characterised by waterways, with several lakes and the beautiful Kiiminkijoki River shaping the landscape.

Along the banks of Iijoki River is the main district of Yli-Ii with magnificent boreal forests setting the scenery. This area has a lot of history dating back to the Stone Age, showcased in the archaeological exhibitions of Kierikki Stone Age Centre.