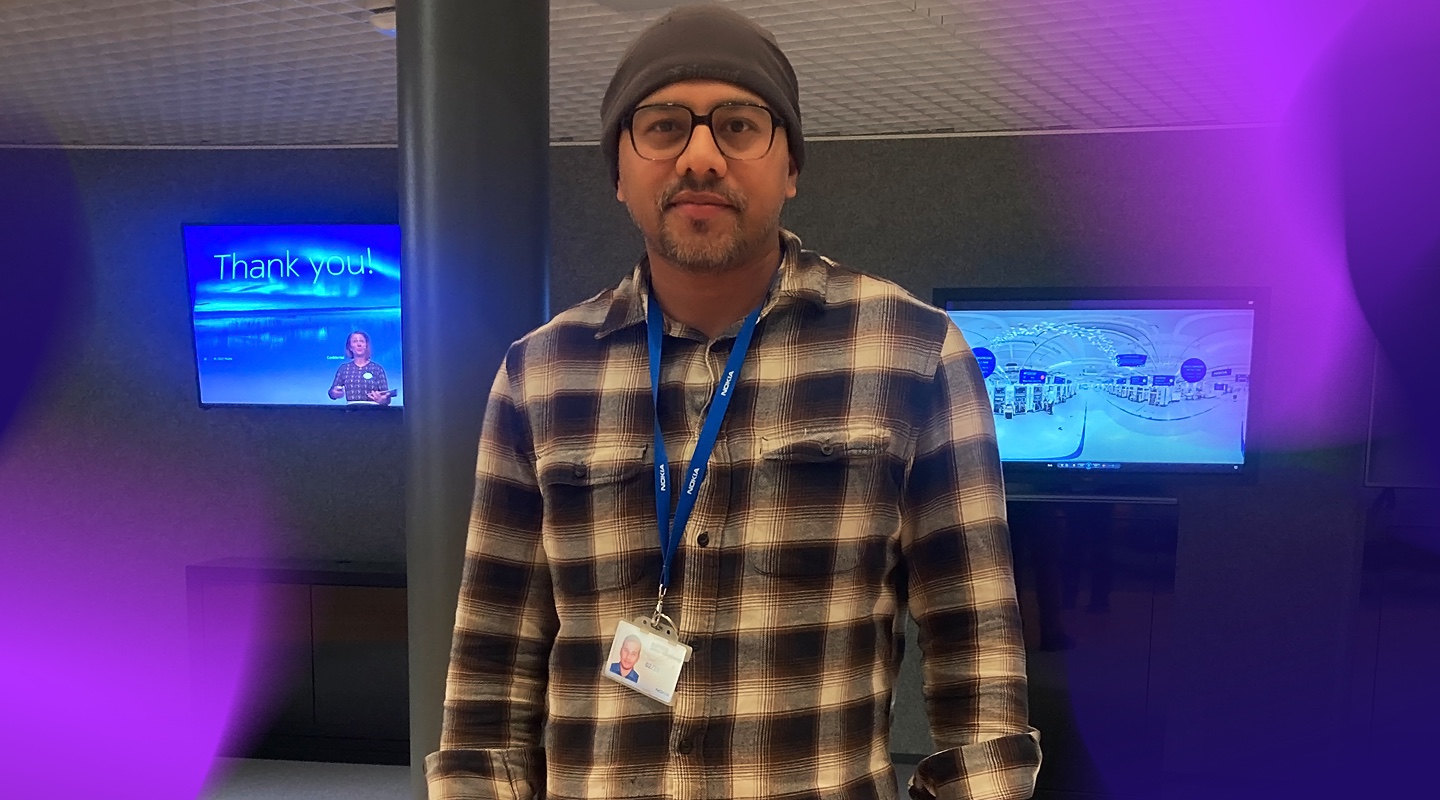 Rafeeq Rafeeq is a newcomer to Oulu. He moved to the city with his wife and two daughters in February 2022 to join the team that designs new electronic systems at Nokia.

“In India I couldn’t give much time to my wife and kids because my work was so hectic. There was no fixed time for doing work and for being off work. I often ended up working in the evenings and also at the weekends.

“Family life was difficult to manage in India. Here in Oulu my wife and children are happy because we have a lot more time together.”

Moving to Oulu has brought big changes to Rafeeq’s life. In addition to establishing a work-life balance, the hardware designer from Hyderabad has found a high-tech job that he’s passionate about.

“Hardware, such as microprocessors or chips, is a big part of base stations used by mobile phone networks. My team’s work involves designing new chips,” he explains.

Rafeeq talks about the intricacies of his job with an air of confidence. He has a brilliant ability to describe complex technical processes in a simple and clear language.

“There are various stages in chip design. The first involves coding. The next step is to take the coding into electronic design automation (EDA) software.

“That’s my place in the process: the border between hardware and software.”

“We operate at the high end of
telecommunication engineering.”

“My team uses the software to make sure that new semiconductor chips match the physical environment they will operate in.”

It’s a complex job that requires strong analytical skills but Rafeeq is keen to point out that for a highly-qualified engineer, this kind of work is hugely enjoyable.

“There’s so much to explore. Basically, our job is to design chips for certain products such as base stations.”

“When a chip we’ve designed contributes to the success of an end product like 5G Baseband Radio, I feel proud to be part of such a disruptive technology.”

“It’s great to see how the hardware behaves when we make certain changes. I can see what exactly is happening and how those changes affect other parts of the system.”

Rafeeq enjoys working with world-class technology at Nokia, designing chips to work with 5G and 6G mobile technology. “We operate at the high end of telecommunication engineering,” he says proudly.

Find your new path at Nokia (opens in a new tab)

But why do we need to develop new chips all the time?

“What’s driving development with regards to chips in Mobile Radio is the same that we have seen with processors in mobile phones. We want to make them smaller, more cost-effective and we want them to use less power. At the same time we want to put more functionality in them. An example in Mobile networks would be to support more cellular subscribers with better speed/coverage.”

Rafeeq says that designing chips to see if they meet the requirements in their operating environments is a rewarding job that has the potential to make a global impact. He is keenly aware of the difference he can make for millions of mobile phone users around the world.

“It allows me to have a direct effect on people’s lives. The changes I’m making during the design process will greatly improve the quality of people’s mobile calls. It’s hugely satisfying, knowing what I can achieve.”

Another factor that boosts Rafeeq’s morale is that he feels like he’s a valued member of the team whose opinions are important.

“My managers value my expertise and ask for specialist view and appreciate my feedback. I can reach out to anyone in the organization. Communication is open and honest.”

Rafeeq has a fellow Indian and a Nepalese colleague in his Oulu team and he also works with Nokia colleagues Finland and other countries around the world. “I like that my job involves global exposure,” he says.

“In all my dealing with all these people of different nationalities, I’ve never experienced any discrimination or prejudice. We’re all treated equally at Nokia. It’s a pleasant, welcoming environment.”

The road from India to Oulu

Rafeeq is from Hyderabad in India. He completed his Master’s in Microelectronics & VLSI design International Institute of Information Technology in Pune.

After working for a decade in India, he moved to Lund in southern Sweden where he spent two years working for Ericsson as contractor, before accepting a job offer from Nokia in Oulu.

How easy was it to settle in Oulu with a five-year-old and an 18-month-old daughter?

“It was very smooth. Oulu is a good place. People are warm and welcoming. Finnish people are actually very helpful. They’re happy to talk to us, in our locality for example.

“When you ask for information, they often give you more details than what you’ve asked for but that’s good,” he smiles.

The family appreciated the support they received from Nokia to facilitate their move from India to Oulu. Nokia assigned them a consultant who helped them open a bank account, find a house to rent in Oulu and sort paperwork for the Finnish administrative and health systems.

“They even helped us with advice on what clothes we needed for the cold weather in Oulu. We only saw snow once where we lived in southern Sweden.

“By contrast it was -20C and a meter of snow when we moved to Oulu in February. The advice we had received on layers turned out to be super useful,” points out Rafeeq.

The family had been concerned about the Finnish language before moving to Oulu but they say they shouldn’t have been. They’ve found that most Finns speak good English. “If they don’t, Google Translate works well for English to Finnish translations,” says Rafeeq.

Language will soon be even less of an issue for the family as Rafeeq’s wife is taking part in the integration course for immigrants. It’s a programme offered by the Finnish government where she’s learning the Finnish language.

“It’s not an easy language to learn but she really likes the course. There’s a lot of practice and she’s making good progress,” Rafeeq says proudly.

After living in Oulu for half a year. Rafeeq has a clear verdict on why it’s a great idea for a family with young children to move here.

Top of his list is the quality of Finnish education and work-life balance in Oulu.

“Both of our children are in daycare where they’re looked after very well. We had concerns about sending the younger one to daycare at such an early age: after all she’s only 18 months old. But she settled in easily in a week or so.

“The teachers are all very good. They know how to handle kids. They seem to have a good knowledge of child psychology.”

Rafeeq is clearly impressed by the Finnish early years’ education system, but he says the best thing about living in Oulu is “having his personal time.”

“Here everybody’s aware of where the cut-off line is between work and private life. Family life is respected and that is very good.”

Rafeeq believes that a clear division between work and private life is driven from the very top. “It’s part of Finnish culture,” he adds. “The Finnish government also works according to the same principles.”

Working in a hybrid model

Rafeeq works in Nokia’s Oulu offices for two days a week and he works three days from home. “This gives me great flexibility,” he says.

At Nokia, staff can choose from three models of working. One option is to work fully remotely. Option two is what Rafeeq does: splitting the week between working in the office and at home. It’s called a hybrid model. And those who prefer to work in the office all the time are of course allowed to do that.

The system is very flexible: it’s possible to switch from one model to another one.

The monthly gatherings are activities organised by managers for all the team to go out and have fun together.

“When I came in February, my manager took us cross-country skiing. He brought four or five extra pairs of skis and boots for those of us who didn’t have them.

“The next month we went bowling with the team, followed by a trip to a restaurant.

There are people working in another team who also report to Rafeeq’s line manager. They are invited to these events as well.

“This is great because you get to meet all the folks working together – colleagues whom you’d never normally meet otherwise – in a nice social environment.

“I find Finnish colleagues really easy to chat with, cracking jokes. Before we moved here, I thought Finns were reserved but I don’t think it’s true,” says Rafeeq.

Rafeeq and his family enjoy exploring the Finnish countryside and spend time in the beautiful natural environment surrounding Oulu.

The recreation area of Koitelinkoski on the Kiiminkijoki river, just 25 km from the centre of Oulu, is a family favourite.

The area consists of small islands which divide the river into smaller streams and rapids.

“I was amazed to see how close you can go to the water on wooden planks. There are lots of barbecue places that anybody can use at any time of the year, even in the winter when there’s a lot of snow.”

Rafeeq says life is easy in Oulu. “It’s a small, laid-back city with no traffic jams. The daycare is close to our house and the office is easy to get to.”

Rafeeq’s family in India kept asking about daytime temperatures in Oulu after they moved last February, getting increasingly worried as the weather took a frosty turn.

“We told them not to worry. The house is warm and we’ve got the right jackets. We have no complaints.”

Nokia creates technology that helps the world act together. Are you open to joining Nokia?

Check open positions in Finland! (opens in a new tab)

Read more about working in Oulu


Public service point of the City of Oulu: