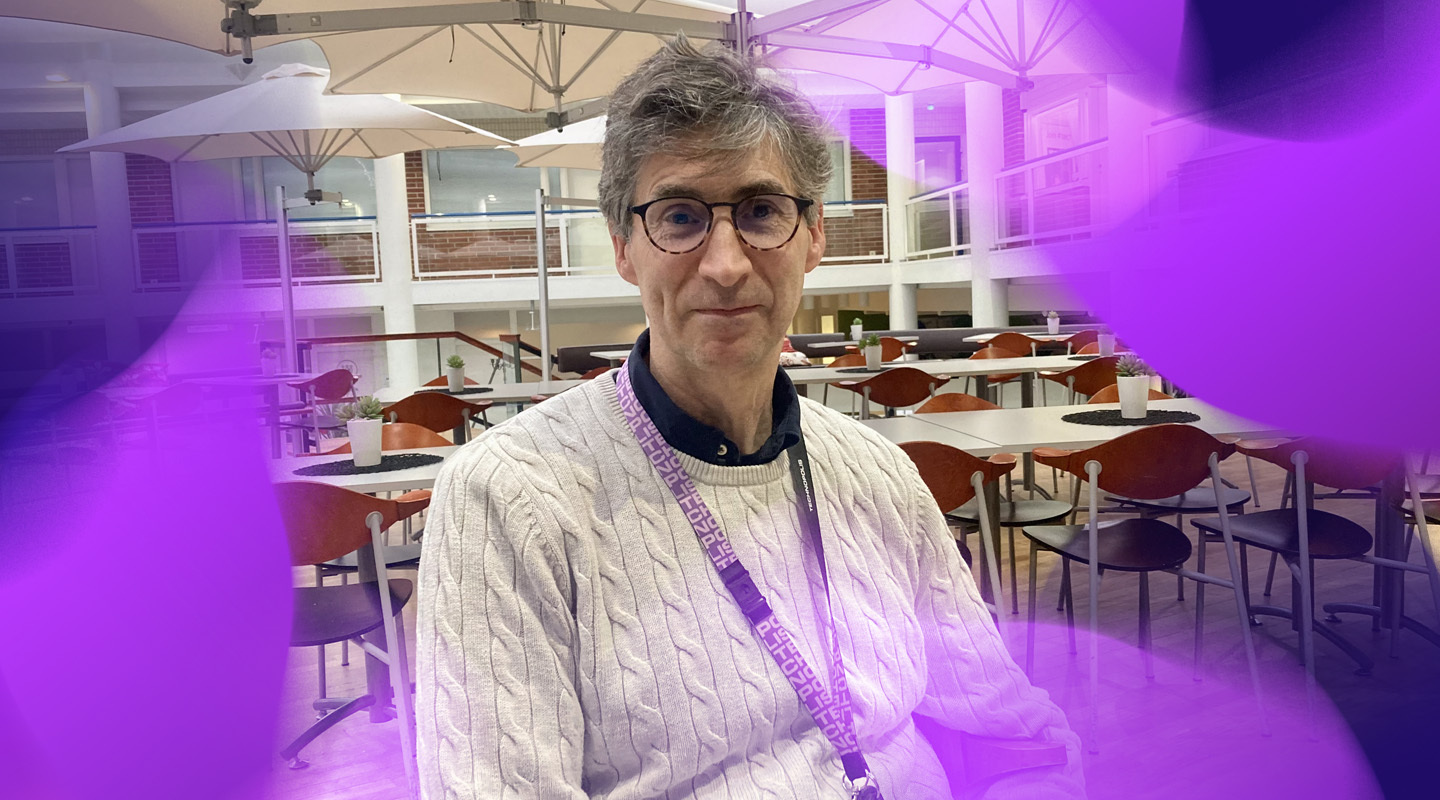 Oulu is the first location in Europe where Silicon Valley startup Alif Semiconductor has established a presence. Why did the firm decide to come to Oulu after setting up two offices in California, one in Singapore and one in Bangalore, India? Neil Jackson, an engineer who launched Alif’s office in Oulu last August, has a simple answer.

“The founders of Alif appreciate the level of engineering competence in Oulu. And it’s not just them: people in the high-tech industry around the world all know Oulu and they have a lot of respect for the quality and range of expertise in the city.”

A random meeting with a high-tech product at a European trade show may have also contributed to Alif’s decision to set up an office here.

“The executive managers were impressed by a very innovative and well-designed product and they asked: ‘Where does it come from?’ The answer was Oulu.”

Neil Jackson is a man with a calm and reassuring presence. An engineer with over 30 years’ experience of working with cutting-edge technologies, he oozes charm, quiet confidence and professionalism.

How did this soft-spoken engineer find his way from Stoke-on-Trent in England to Oulu, and what’s made him stay and build a career just below the Arctic Circle?

“It started a long time ago. I first came in 1985 to work for a year,” he begins telling his story.

“I was studying electronic engineering and wanted to go away from the UK to see the world. I didn’t know much about Finland but accepted a work experience placement in Oulu,” he recalls.

A few years later, Neil moved to Finland to work for Nokia in Helsinki. Then in the early nineties he moved to Oulu – his new wife’s home city.

After 20 years with Nokia, and a few shorter stints with other tech companies in Oulu, he joined Silicon Valley start-up Alif Semiconductor in 2022.

Learn more about Alif Semiconductor (opens in a new tab)

Made in Oulu: innovation that makes the world a better place

Neil leads a team of engineers who develop applications for a microprocessor – a system-on-a-chip product – that uses artificial intelligence (AI) and machine learning to integrate state-of-the art technology into everyday life.

“In my company, and in many others in the tech sector in Oulu, your job will give you world-class opportunities. It’s also very rewarding: we do a job that helps improve people’s lives around the world,” he explains.

Neil says that being able to work with the most advanced technology for AI and machine learning is a big draw for engineers from around the world.

“We are a leading-edge tech firm where people have an opportunity to do truly meaningful work and have an impact on a global scale. Knowing that we’re making people’s lives easier in various ways is a big boost when you do your job.”

Find your new path at Alif (opens in a new tab)

What can newcomers expect?

If they haven’t worked in a Nordic country before, workplace etiquette in Oulu may come as a surprise.

Communication in a Finnish office is direct and straightforward. People call everybody by their first names: corporate positions doesn’t make any difference.

“People are encouraged to express their opinions and be themselves. You’re allowed to influence things. That attitude fosters innovation.”

And if you’re hired as a junior manager, you may find that you’re a decision-maker.

“I’ve always liked how you’re treated in a Finnish company, and how organisations work. There’s not so much hierarchy: you can give feedback directly to the biggest boss. People are encouraged to express their opinions and be themselves. You’re allowed to influence things. That attitude fosters innovation.”

How about corporate benefits?

There’s no hard and fat rules: the range of benefits varies from one business to the next. Some companies in Oulu offer benefits such as company bikes, lunch vouchers, entertainment vouchers or having a sauna on the top floor of the office overlooking the sea.

“The lifestyle in Oulu is very relaxed. It’s not as busy as it is in bigger cities like the capital, Helsinki, and employers very much support this lifestyle,” says Neil.

Moving to Oulu with children

Is it a good idea to move to Oulu with children? Neil definitely thinks so.

“If you have a young family, you’ll find that the quality of daycare and education is excellent here.

“We have three children. My wife has never been a stay-at-home mother. In Oulu you can easily combine family life and work life because children’s services are so good.”

“Flexible working hours were very common here even before the pandemic: employers try to accommodate the needs of people in different phases in their lives. For example they allow them to work a four-day week to help look after children and have a career at the same time. That flexibility has increased even further because of the pandemic,” Neil explains.

But how easy is it for people coming to Oulu from other parts of the world to fit in?

“It’s no problem at all,” says Neil. “People from all backgrounds are welcome and treated equally here. I haven’t come across any racial or religious discrimination. Finns are polite and they make a genuine effort to respect the culture of foreigners.”

According to Neil it helps if you try to learn Finnish. He says even a little knowledge of the language goes a long way to help integrate in the community.

But learning Finnish is by no means mandatory as Finns are among the world’s best speakers of English as a foreign language. So it’s no surprise that most foreigners in Oulu find that they can get by very easily in English.

For most international recruits, English will be their work language anyway. Neil knows many foreigners who’ve been living in Oulu for a very long time without learning any Finnish – and they have no problems communicating in English in everyday situations.

“I personally wanted to learn Finnish. When I moved from Helsinki to Oulu I made a decision that I wanted to speak Finnish at my workplace. My colleagues were all very patient with me,” recalls Neil.

“After a year I was able to have short conversations and my knowledge of the language gradually increased from there.”

Work-life balance with an Arctic twist

But what do you do in Oulu after work? Finland is a country of forests, lakes and sea.

Oulu has plenty of each, providing amazing opportunities to live an active lifestyle throughout the year.

“What makes Oulu a special place is the easy access to outdoor activities,” says Neil.

Unlike most of the rest of Europe, Oulu still have four distinct seasons. Summers are full of light: at midsummer the sun sets after midnight and rises less than two hours later, which means it doesn’t get dark at all. Summers are also quite warm: the average high temperature is 19C which may come as a surprise: after all the city is just over 200 km (125 miles) south of the Arctic Circle.

By contrast, there’s a lot less daylight in the winter. But snow on the ground, usually from November to April, helps light up the darkness.

Neil loves being active in the great outdoors.

“I live in a small fishing village on the coast, 20 km north of Oulu. I have a boat in the harbour and I enjoy going out to sea in the summertime. Summers are beautiful and the great thing is you can go out any time of the day: there’s always light. After work I just jump on the boat and go.”

If he wants a change from the sea, Neil heads to his local golf course or plays frisbee golf.

In the winter he does cross-country skiing. There are almost 300 km of maintained skiing tracks in Oulu so you’re never far away from one of them. Just a few minutes’ skiing distance away from the hustle of bustle of the city centre you’ll find yourself surrounded by the frozen silence of Finnish nature.

“I don’t have to go far to go skiing, I just walk down the road from my house and jump on the ski tracks,” says Neil.

Cross-country skiing is now one of Neil’s favourite pastimes but he admits that it wasn’t straightforward to start with.

“I bought an expensive new pair of skis and went out. Within a few minutes I fell over so badly that I broke the shoes.

“I took them back to the shop and the salesman gave me a new pair. I went back skiing and I fell over again and I broke the shoe again. Amazingly the shop gave me a third set of brand new boots. I was so impressed by the level of customer service that I decided not to give up and learn freestyle skiing. Now I am a good skier.”

Having mastered the technique, Neil often goes skiing in the evening. The ski tracks are lit and he always meets someone he knows.

“A neighbour will go past me and say hello. People stop and have a chat. It’s like a social event. Everybody’s in a good mood: they’re out in the clean air, doing their favourite sport. It’s very pleasant.”

In the spring when days get longer Neil goes walking on the sea ice that’s covered by a thick layer of snow.

It’s a popular activity. On a sunny weekend in March many Finnish families ski around islands in the sea, stopping at lunchtime to cook sausages on a campfire.

Are there any downsides to moving to Oulu at all?

Neil believes the only possible shock to a foreigner would be the high level of taxation in Finland compared to many other countries. But he believes it’s a price worth paying.

“In exchange for paying high taxes, you get a safe environment. Here seven-year-olds go to school on their own: they don’t need their parents to drive them to and from school. It’s a very good social environment.

“The only other thing is the cold and dark winters. But winters are also pretty unique this far north. It’s very dark in November and December but only for a short time. After Christmas light comes back very quickly. And in the darkest times you often have a chance to catch northern lights dancing in the sky in Oulu. Most people never cease to be amazed by them.”

Read more about working in Oulu